Alot has happened in the last couple of days. Lots of appointments with specialists trying to get to to the root of my problem. My neurosurgeon wanted to try somethings first, steroid injections at the site, medications for pain and inflammation, but nothing helps with the constant disabling pain. The final nail in the coffin was the discogram yesterday. It showed without a doubt that I have herniated discs at L5 S1 as shown on the MRI but my surgeon was also thinking, and so was I, that L4 L5 disc had ruptured again and was an additional source of the pain and the discogram confirmed his suspicions. It would have been devastating to have surgery at L5S1 only to have to go back in again for L4L5. The L4L5 was the area I had surgery on the first time, an L4L5 discectomy in 2004 trying not to fuse the vertebrate. I was told by the surgeon that did my first surgery that the disc could rerupture in 1 year or be fine the rest of my life, there was just no way of knowing. With my luck it was just a matter of time.
Now 2 years later I am about to go under the knife again with a new neurosurgeon and a more surious surgery with an increased recovery time ahead of me. I will have the disc at L4L5 and L5S1 shaved down and have Ray(brand name of the implants) threaded fusion devices implanted between the vertebrae, then bone from my hip will be placed inside the cages to grow together which should take away my pain. I go in for this on 3/29/2007 so it my be awhile after wards before I can sit here at the computer. I remember the last back surgery, not a fun time. I plan to make a total recovery from this surgery but I will have to be out of work for 3 months talk about boring. It is my hope that after this I will be able to carry Norah around all that I want without pain. Below are some pictures of the procedure.
Glen 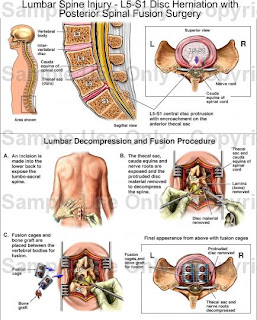 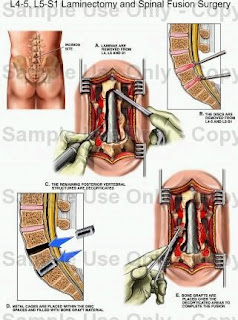