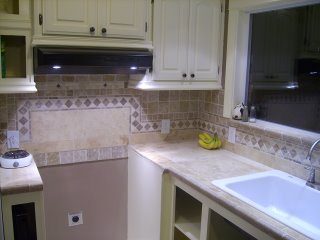 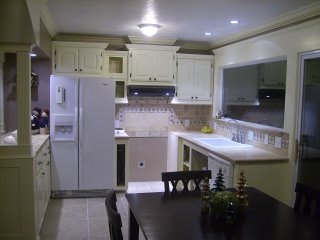 I haven't posted in awhile, sorry. We finally got around to remodeling the kitchen. We have been putting it off for a while, because of the expence and because of the idea of going without a kitchen for a couple of weeks, and finding a couple of weeks in which to do it. I had a job that I had lined up to do get pushed back a few weeks, so me and Lori started ripping the old kitchen out with reckless abandon not knowing when the next opportunity with me have a week straight off was going to come. The floor was in need of repair, the people who used to own the house had let a faucet leak for years judging by the number of floor joists I had to replace. It took 2 weeks and we still have to have doors made by a cabinet shop that make all my doors for me but it is so nice to have a working kitchen again. We used traverteen and tumbeled marble on the counter top and back splash and put in lots of outlets , a vent a hood that vents to the outside , fridge with ice and water in the door, garbage disposal, none of which we had before. The two things I love are the sink to give Norah her bath in (a back saver compared to bending over the tub in the bathroom), and the wall of glass with the sliding door and 6foot6in x3foot window over the sink that looks out over the back yard. Dishes aren't so bad with a butiful view.
Glen
at 7:11 PM

Wow Glen - the kitchen looks great. Wanna come and do ours? You'll just have to pay for your flights to Australia!

I am not sure if my last post went through, but I want to tell you that I have followed your blog for a while now. I do believe that the agency that denied you into their program made a huge mistake. You two will be wonderful parents. This is evident in your blog. I cannot wait for your family to get a referral and to see your precious baby.