Imperial guards for Christmas. Our little boy not so little anymore. 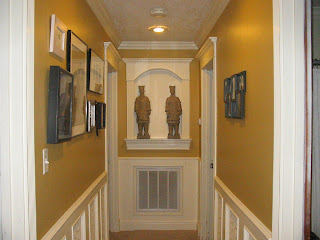 Lori got me 2 imperial guards modeled after the ones that the first Emperor of China had made to protect him in the after life. These replicas will now stand guard over our house from the hallway. We had a good Christmas this year, everyone is healthy and happy thats what is most important. At the begining of our adoption journey we had hoped to have Norah home for this Christmas but now with the slow down we are hoping to have her home by Next Christmas. I know that we are not alone in these thoughts as other families all over the world that were paper chasing and were loged in over in China the same time we were are hoping for a speed up in referals, at least we are hoping not to have them slow down anymore. My best guess after looking at the lastest on referals, and asking friends who are also adopting in the China program what they think, it looks like March 2008, but we should know alot more by next Christmas. 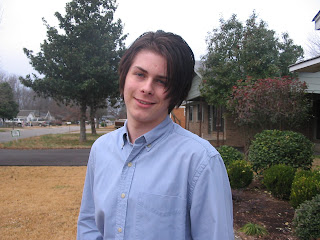 Our son has gotten alot taller over the last year. He has grown so fast that he actually has strech marks because his skin couldn't keep up. He is tall now and will be old enough to drive next July (2007), scary. I think we will put a tracking system on his car so we can keep up with him, I'm not kidding. We are also lucky enough to have lived in our little town for the majority of his life so we have the benefit of people about town knowing who he is and who he belongs to. We got him a new cell phone this Christmas that takes pictures and will shoot up to 14 mins. of video. It's also an mp3 player, and has unlimited internet and mobie TV on it so he can watch regular tv shows on comedy central, discovery channel, vh1, ect. I will bet that he will get caught at least once this year watching the TV on his phone during class it is just a matter of time. He is a good kid that stays out of trouble most of the time so while the phone with it's monthly service is a little on the expensive side it is one of the rewards that we as parents agreed to give him for staying out of trouble, keeping his grades up and basically being a good member of society. He is so looking forward to being a big brother to Norah and we are sure that she will have him wrapped around her little finger before we even get back from China. He is kind hearted and good with small children. It is funny, he is so far ahead of other kids his age in his thoughts, insights, and ability to talk through difficulties, and at the same time he is right where a normal 15 year old should be. Lord, help us all when he starts driving on his own. Well mostly help us because it will just be the beginning of him making a HUGE move towards independance and adulthood. We still can't help but to occasionally see him as the little 2 year old streaking through the house after bath time with a towel on his head.
Glen
at 9:08 AM