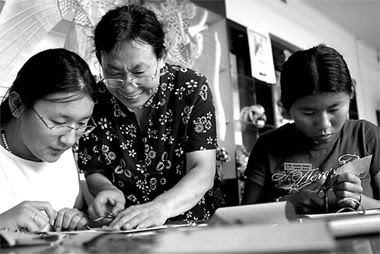 Anna Li Wolf (left) and Natalie Cecere (right) learn traditional Chinese paper-cutting on Friday in Beijing, during their 10-day summer camp. Tian Chi
Amused as they were, the summer campers found it really hard to create the same butterfly patterns that their teacher so easily cut out.
How does she do it? The young boys and girls asked, joking at each other's snowflake-shaped folded paper.
"They're like my friends," said 15-year-old Sara of her teammates. "It's like any other summer camp I've been to."
But it definitely isn't just any ordinary summer camp.
The atmosphere of bonding was a result of their shared background as adopted children from China. The 30 children were orphaned in different Chinese provinces and adopted by North American families between 1991 and 2001.
Today, 29 of them live in 17 US states, including Alaska and Hawaii, while the other resides in Canada's Saskatchewan Province.
The 10-day summer camp, themed "Embracing China, Experiencing Beijing," opened on Wednesday and is the first-ever such activity organized and hosted by the China Center of Adoption Affairs, Ji Gang, director of the domestic adoptions department with the non-profit organization, told China Daily.
It's the first China visit for about half of these children since their adoption, including Jiangsu-native Alyssa, who was adopted at 10 months old and just celebrated her 14th birthday at Quanjude Roast Duck Restaurant in Beijing on Friday night, and Sara, adopted at 11 months in 1991 from the same province.
The youngsters have so far visited the Forbidden City, the Capital Museum and the Temple of Heaven, as well as Baigongfang, a traditional Chinese art and handicraft museum where they learned about paper-cutting and kite-painting on Friday morning.
On Friday afternoon, they also experienced a taste of haggling at the famous Xiushui silk market.
at 5:23 AM