When Norah first wakes up she is this loveable, cuddly little girl. Just look at that sweet face! I usually miss out on this part of the day with Norah because I am already gone to work before she wakes up. She has an attitude that takes about 45 minutes to kick in after she wakes up, then hold on to your hat! This is only Norah's second Christmas with us so we broke the cardinal parenting rule and woke her up. I think we were more excited than she was at first. 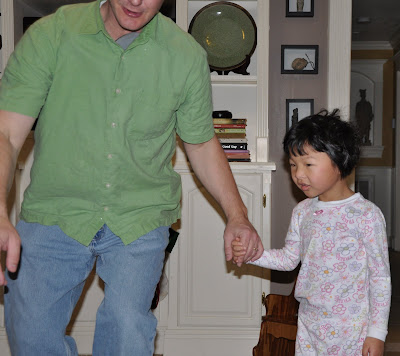 You can see it start to dawn on her. Glen and Norah have been glueing cottonballs on a picture of Santa Claus, each day they glued on 1 cottonball for that day and signed and talked about Christmas. So on Christmas morning we had Norah glue on that last precious cottonball before she could open her gifts. 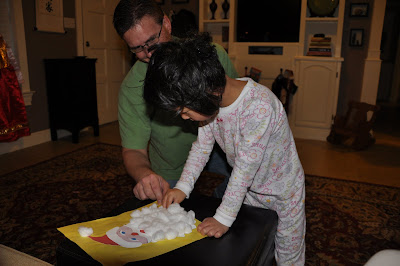 Norah was able to tell which packages were hers. She has become very good at recognizing her written name since the presents started appearing under the tree. She would go from package to package looking for her name and then get all excited when she found it. 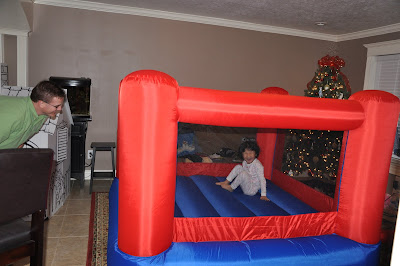 This was the biggest hit! It goes up really quick and comes down really quick. Norah has bounced off a lot of energy in this thing just over the past few days. 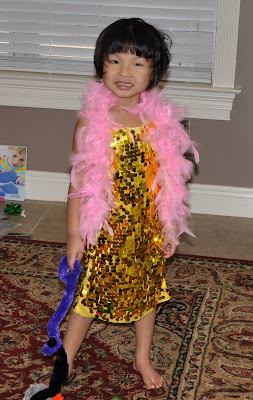 There were also many dress up outfits. My Mom also found Norah some awesome hats that she embelished (one of the hats has my Grandmothers Abby's pin on it) and she found her some gloves. Norah loves playing dressup! This sequin number was the first one she had to try on.

After we finished opening presents at our house we loaded up and headed over to my Mom and Dad's house. Boo is staying over there right now and we wanted to make sure that we got to see him and give him his vegan treats in his stocking. He has been trying really hard to be healthier and mentioned something about possibly going vegan so Glen and I took a trip to Whole Foods and filled his stocking up with whatever we could find. We also picked up some Kiss My Face products for Jessica (Boo's girlfriend) and got her some vegan treats as well. 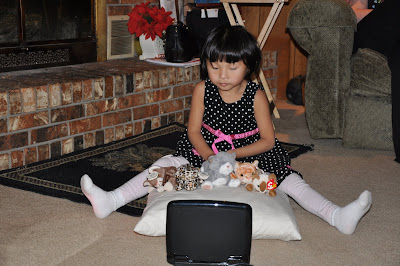 Norah cleaned up and got a new DVD player. She has been without her own since around May of 2010 because she broke it to the point that you couldn't see the screen. Tile, portable DVD players and five year olds do not mix. You can only drop them so many times. The DVD player that is.
She got 5 different little cats this year. Her own litter to play with. They were all lined up watching Toy Story 3.
There was lots of good food and company. We all sat around and talked and really enjoyed ourselves. Boo took to my Dad's Jazzy scooter like a duck to water. In fact he buzzed all over the house in it. I told Dad that he may have to fight Boo just to ride in his own scooter. Norah thought the scooter was for her when we went to pick it up and started crying when we told her it was for Popi (Grandpa). She has managed to scam many rides from Popi though, so she is satisfied to share .... for now.
I hope everyone had a Merry Christmas....Channukkah......Solstice (Yule) or just a plain good December. May the New Year be kind to all of us.

Congrats to Brandonx on possibly going vegan. My fiance, Joseph, is vegetarian, and he was vegan for a bit before he decided it was way too much of a hassle, and he dropped back down to vegetarian. Far easier, especially in a place like Arkansas in which half the people don't know that vegetarian means, no you don't eat fish, or chicken. *sigh*


Norah looks like she had a ball at Christmas. It's always awesome looking at the littles on Christmas.