There is nothing like being at the start of another boiling Arkansas summer to make you want to pack up and move north. People here hold out for parking spaces with shade (no matter how far they have to walk to get into the store or building), do yard work in the wee hours of the morning or after the sun starts to go down, and they search out any cool water or AC they can for approx. 4 or 5 months out of the year. More or less if you live in Arkansas you better not be put off by being sweaty ALL the time. However, when there is that occasional reprive and the sun is shining, humidity is low and there is a cool breeze people come out of the woodwork and bask in the outdoors with all thoughts of inside chores forgotten until the weather changes again and we are driven back indoors.

One of the best ways to beat the heat is to go swimming. We have gone swimming more this year than in the last ten years combined. Luckily Nana and Poppi have a beautiful, big swimming pool at their house. They also LOVE to have Norah come over. Oh sure they like seeing us too but lets not kid ourselves Norah is the star of the show. Whenever we say we are going swimming she immediatley starts doing the signs for Nana and Poppi. She can tell you which roads to turn on to get to their house and applauds enthusiastically when we pull up in the driveway. We have even delayed putting up her little pool in the backyard because she loves going over to her grandparents house. It also helps that Nana and Poppi think that she is the best thing since sliced bread. 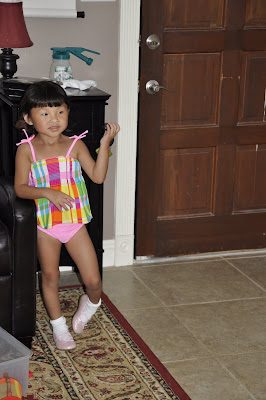 Getting ready to go swim. I'm not quite sure why we needed socks and sparkly pink princess shoes to go with the swimsuit. 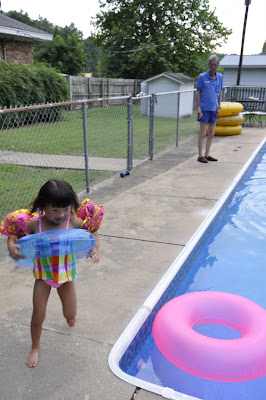 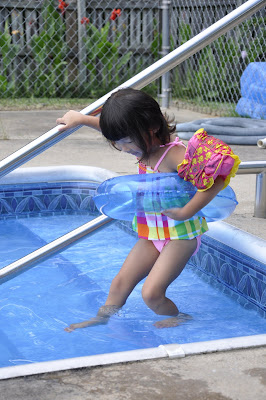 This is the same kid that we had to trick into getting in the tub the first few times after we got her in China. Now we have to send the muscle out (Brandon) to get her out of the pool. 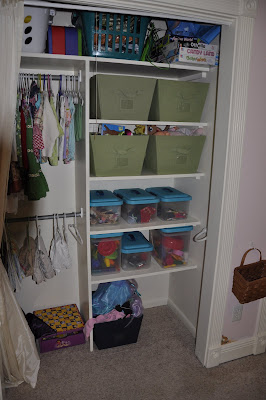 This is Norah's closet. We recently had to put the two bins that contain her pj's/underwear and shorts/swimsuits up on the top shelf because she would empty both bins and try everything on and then rub it around on the floor causing mass amounts of laundry. The night that we did this Norah deciede that she had to have a full set of pj's even though for the last 2 months we were lucky to even get underwear on her without a fight. I thought that it had been awfully quiet in the back of the house. Then there was crying. Well, Norah had built herself a staircase out of her toy bins and climbed up pulled out a pair of pj's and then fallen off. She only had a red spot on her foot but the "staircase" was a good 4 feet tall. Maybe she'll be an engineer when she grows up or a circus performer. Who knows. 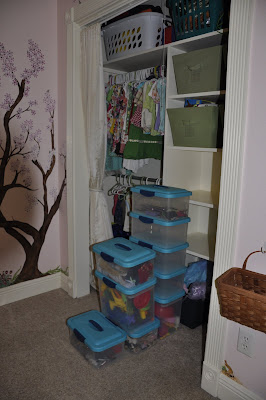 Boo has become somewhat of a gypsy since he graduated from high school this month. He is now hanging out at my brother and sister-in-laws house playing the part of man servant. They have him doing housework and other odd jobs while helping him get a resume together and look for a job. My brother and Brandon have always been close and him and his wife are a good influence on Brandon. I will attempt to get some pictures of him this weekend, although here lately he is as elusive as Big Foot or Nessie. With 4th of July and his 19th birthday coming up this month we should have some prime opportunities to spend some time with him and his girlfriend.

Ah, the good old days of parking in the shade. Remember how you had to explain that to me? Ha! Ha! We miss you guys! Thanks for updating your blog ... we were beginning to worry about you! Glad to see you're busy having fun. XOXO Melissa