If your squemish you may want to pass this post up.

Seriously. Another title for this one could be Arkansas Post-op. Ok, I warned you. Scroll down. 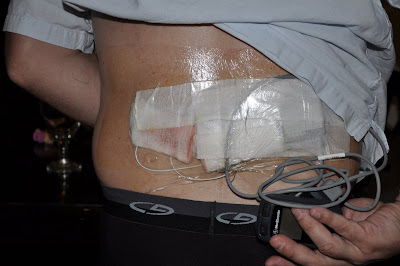 Glen had a spinal cord stimulator put in on Tuesday for a trial run to see if it would help with his ever present back pain. We go Monday to have the temporary leads removed. So far the trial is a bust. It doesn't relieve pain where he needs it and he says it feels like he's holding his leg up against an electrified cattle fence. It also likes to shock the snot out of him if he steps down with his heel to hard, coughs, sneezes, farts, or even talks loud. Needless to say he has been a little cranky. The doctor and the rep for the device could not get the leads fed up to where they needed to be because of some sort of blockage or scar tissue in his back. They also had trouble "dialing in" the device to give him relief from his pain without shocking him to the point his legs would draw up on their own. We were really hoping that this would work and that Glen would be able to go back to work or at least have a better quality of life with less pain. For now though it appears we are going back to the drawing board. 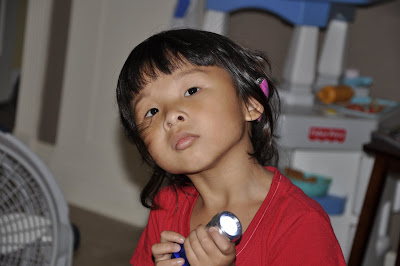 This is Norah, trying desperately to see the tv around me trying to take her picture and get her to smile. She is VERY glad that none of the doctor stuff has had anything to do with her this week.
My Mom had her knee replaced last week. She got to go home on Saturday and we spent Saturday night and Sunday at her house. She is doing very well. Norah wanted absolutely nothing to do with my Mom while she was in the hospital bed, with everything Norah has gone through I can't blame her.
Hopefully everything slows down a little for a while because it has been non stop around here lately. I've left alot of things out but at this point the highlights are more than enough.

Holy crap! I hope everyone is doing well ... as well as they can be anyway! You guys need a vacay. To the mountains, maybe. Melissa

Ok, now I gotta get a new keyboard because I just spit out my diet coke all over the one I got. *giggle* Sorry, I know its not funny that he is in pain but I just have this picture in my head of him farting....and getting shocked! (can ya tell I have 2 grown boys??) Or him sneezing and falling to the floor in a fetal position because of a shock..*giggle* Sorry...I just can't help it!!!

I hope that you guys find a way to ease his pain. Back pain is really no fun!

*snort* farting and getting a shock!