Norah gets a birth certificate. 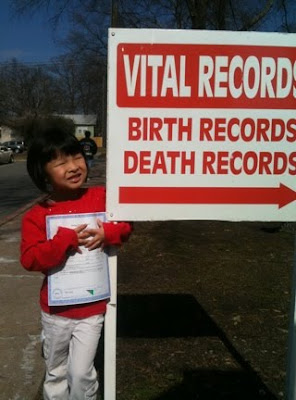 Congrats. It's so weird how each state works differently with the Federal government. We had to do another homestudy, set a court date, and talk to a judge (3 years after we actually adopted) it was as much ceremonial as it was official. But it was a cost we would have liked to have spent otherwise.

Karen, it was much easier here. We did have to have a lawyer but he was able to just petition the court for an order. After we paid an extra case fee the judge filed all of our original adoption paperwork with the court and issued the order for vital statics to issue Norah a "Foriegn Born Certificate of Birth". There is a statute in Arkansas law that allows for the courts to recognize foriegn adoptions here. Yeah!