China cracks down on one-child violators 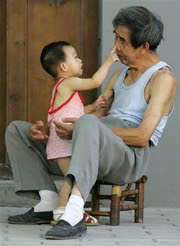 Reuter photo
File photo of a man playing with his grandchild in Beijing, August 21, 2006. China...
From Yahoo news
Fri Sep 14, 9:19 AM ET
BEIJING - Urban Chinese who have more than one child will get a black mark on their credit record, the government said, in a scheme that appeared to target newly rich couples undeterred by fines from having extra children.
"In the future, city residents' family planning violations will be entered in the credit system of the People's Bank of China," said a notice posted late Thursday on the Web site of China's National Population and Family Planning Commission.
It didn't give additional details about the scheme and it was not immediately clear whether the action might affect a person's ability to conduct financial transactions.
China's 28-year-old family planning policy limits most urban couples to just one child and allows some families in the countryside to have a second child if their first is a girl.
Rising incomes mean many people can afford to break the rules and pay resulting fines. The government has tried to crack down on the trend by raising fines and, in some cases, trying to embarrass violators.
In February, the eastern province of Zhejiang announced it planned to name and shame rich families who ignored the one-child policy by paying to have their second or third baby.
China has about 1.3 billion people — 20 percent of the global total. The government has pledged to keep the population under 1.36 billion by 2010 and under 1.45 billion by 2020.
at 4:46 PM

WOW-Interesting...I wonder how this will affect adoptions from China.