Have A Happy Moon Festival Everyone.

This is a time for family & friends to get together. Our Local FCC is hosting a get together for the families & kids with lots of games and story telling. It is a good time to get caught up on what everyone has been up to. Below are some stories of the moon Festival.
Glen 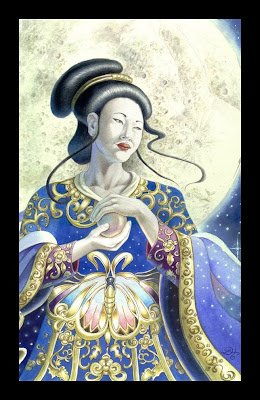 I. The Lady - Chang Er
The time of this story is around 2170 B.C. The earth once had ten suns circling over it, each took its turn to illuminate to the earth. But one day all ten suns appeared together, scorching the earth with their heat. The earth was saved by a strong and tyrannical archer Hou Yi. He succeeded in shooting down nine of the suns. One day, Hou Yi stole the elixir of life from a goddess. However his beautiful wife Chang Er drank the elixir of life in order to save the people from her husband's tyrannical rule. After drinking it, she found herself floating and flew to the moon. Hou Yi loved his divinely beautiful wife so much, he didn't shoot down the moon.

II. The Man - Wu Kang
Wu Kang was a shiftless fellow who changed apprenticeships all the time. One day he decided that he wanted to be an immortal. Wu Kang then went to live in the mountains where he importuned an immortal to teach him. First the immortal taught him about the herbs used to cure sickness, but after three days his characteristic restlessness returned and he asked the immortal to teach him something else. So the immortal to teach him chess, but after a short while Wu Kang's enthusiasm again waned. Then Wu Kang was given the books of immortality to study. Of course, Wu Kang became bored within a few days, and asked if they could travel to some new and exciting place. Angered with Wu Kang's impatience, the master banished Wu Kang to the Moon Palace telling him that he must cut down a huge cassia tree before he could return to earth. Though Wu Kang chopped day and night, the magical tree restored itself with each blow, and thus he is up there chopping still.

III. The Hare - Jade Rabbit
In this legend, three fairy sages transformed themselves into pitiful old men and begged for something to eat from a fox, a monkey and a rabbit. The fox and the monkey both had food to give to the old men, but the rabbit, empty-handed, offered his own flesh instead, jumping into a blazing fire to cook himself. The sages were so touched by the rabbit's sacrifice that they let him live in the Moon Palace where he became the "Jade Rabbit."

IV. The Cake - Moon Cake
During the Yuan dynasty (A.D.1280-1368) China was ruled by the Mongolian people. Leaders from the preceding Sung dynasty (A.D.960-1280) were unhappy at submitting to foreign rule, and set how to coordinate the rebellion without it being discovered. The leaders of the rebellion, knowing that the Moon Festival was drawing near, ordered the making of special cakes. Backed into each moon cake was a message with the outline of the attack. On the night of the Moon Festival, the rebels successfully attacked and overthrew the government. What followed was the establishment of the Ming dynasty (A.D. 1368-1644). Today, moon cakes are eaten to commemorate this legend.

By Chinese Fortune-Telling Calendar
at 3:56 AM