We had our first German adventure yesterday. My sister, her husband and all the kids went to the castle near their house. The earliest date that we saw on the actual castle itself was 1565. 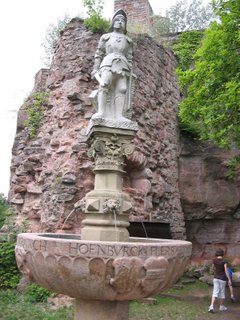 The photo on the bottom of the page shows the town, Landstuhl, below the castle. The castle sits up on a hill apparently for defense purposes.

The picture to the left is of a fountain that is located near the front inside of the castle walls. People have been throwing euros into it so of course the kids were all trying to figure out exactly how they could boost each other up into the fountain to hit the jackpot. Of course this was nipped in the bud quickly.

The picture below and to the left is just inside the tourist entrance on what we assume is the back of the castle. The block layers building the castle were probably glad to see all of the existing stone that they could just build around instead of having to bild it all up with blocks. The picture of the cavern is underneath the castle. We had the kids stand in the middle to give some perspective to just how big it was. There were holes at the top of the cavern that were either for ventilation or "pooping" according to which kid you asked. 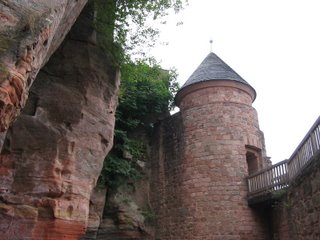 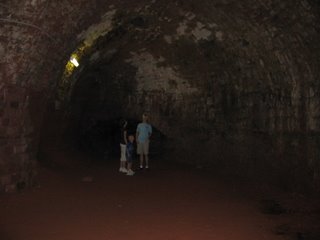 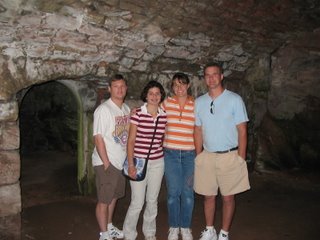 To the left is a picture of what the kids were guessing/hoping was the "torture chamber". In the picture are from left to right Stephen, Amanda, Lorieann, and Glen. It was really dark in there but luckily the flash on the camera made it look like daylight. The picture below is of the back side of the castle were you go in to pay your entrance fees to the grounds. There is also a little open air cafe sitting to the right of this that we didn't take a picture of. 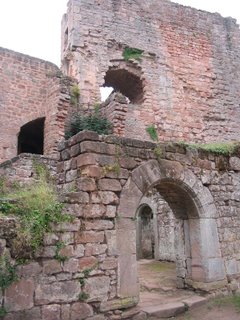 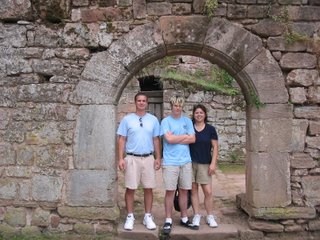 The archway that Glen, Brandon and Lori are standing under has a keystone that has the date 1565 carved into it. What was funny is that before Stephen took the picture of us he had to move several bright blue trash bags from behind us to keep them out of the picture since they didn't look like they belonged in a castle at all. 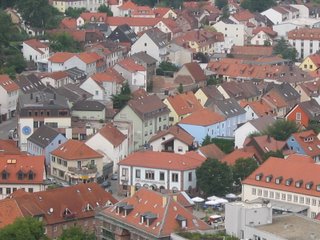 Glad your having a good time, everything is okay at your house, Vegas has only dug out once. Do you have fish food. Love the pictures. Hope Brandon gets over his sore throat, plane air is not the best. Love to all