Brandon started feeling sick the first day we were here. We had hoped it was just jet lag or climate change but by day two he was not feeling well at all, so Lorieann found a German Dr. that was located in the little village we are staying in and could see him that morning. The people at the medical office were very nice and lucky for us, they were able to speak English very well. They wrote us a prescription for some antibiotics that we could pick up next door at the pharmacy. At the pharmacy they told us that they didn,t have the antibiotics there but could order it and it would be there by 3:00. Lori and Lorieann went back to the pharmicy at 3:00 and were told that it was accidentally taken to another pharmacy but they could get it back to their pharmacy by 6:00 that evening so Lorieann and I went back at 6:00 and it was there. It was a good thing that we took him to the Dr. because that night when Lori took his temp. it was 103.9 so we gave him some Tylenol and had him take a warm shower which helped bring it down to 98.7 but he still felt pretty rough today so we let him sleep for most of the day. Below is a picture of Brandon on the exam table in the Dr.s office and Lori sitting beside him. Brandon didn,t feel much like smiling. 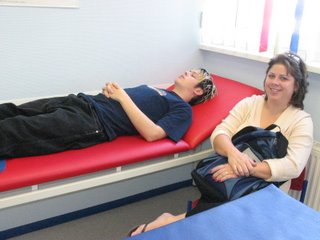 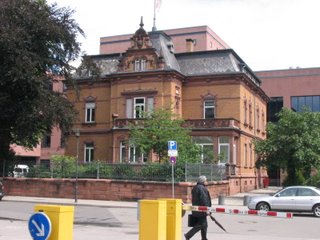 We went to Kaiserlautern today to run errands with Stephen, Lorieann and Joshua and saw this really neat building (pictured below). We also saw a fort that was just sitting smack dab in the middle of a bustling city. 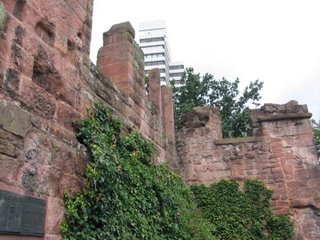 If you look in the upper middle of the picture you can see the skyscraper which was located less than a block behind the fort that was built several centuries ago. It's strange to see the old and new so close together.

50 CENTS for a potty breack. By the fort was this public restroom that you pay 50 Euro cents for. The doors at the front open up like an elevator and the bathroom is just on the other side of the doors. Once the doors close you have like 20 minutes to ....uhm.. take care of business, if you know what I mean. There is music playing the whole time and when your done all of the handwashing, water, soap, and dryer are activated by sensors that turn them on when it senses your hand under the appropriate appliance. So you don't have to touch anything. It was also very clean, as is almost everything we have seen so far. 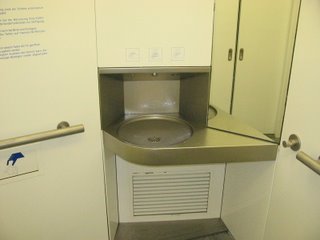 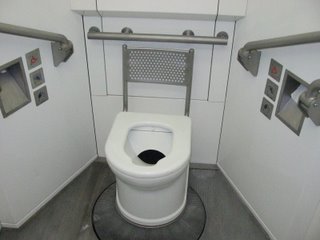 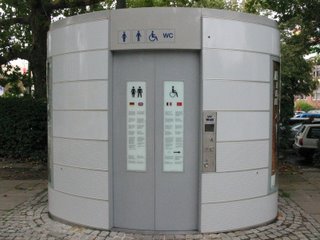 We also walked down a shopping area that doesn't allow vehicles, only pedestrians. There were shops on both sides and it was fairly crowded but interesting none the less with all the new little shops mixed in with street vendors and fruit stands. We had a lady approach us and say some not so nice things about the military to us, I guess because she heard us speaking English to each other. Guess you can't please everyone but she was rather rude and cursed several times. The incident really stood out because our interaction with the German people so far has been very welcoming and warm. They really are amazingly nice people and we refuse to let one person ruin our perception of an entire countries population. I just hope that people of other nationalities that visit/reside in the U.S. can do the same.

The rest of the day was spent running errands and visiting a German toy store and grocery. We had Bratwurst and some little pork steaks on hard rolls that were amazing. We also gorged ourselves on some plum tarts and a type of filled cake that they called beesting. (I know that's probably not how you spell it). Branson seems to be feeling a little better, which is a good thing since we are going to spend the day in Paris tomorrow.
at 12:01 PM