These pictures were all taken in a three minute time period. No joke! All we were trying to do was get Norah to smile so she could show off some of the blackberries and flowers we picked today. 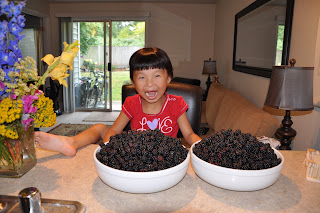 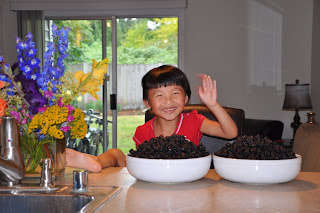 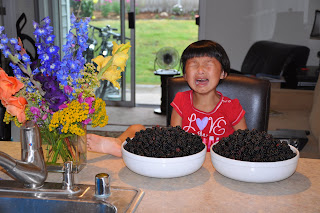 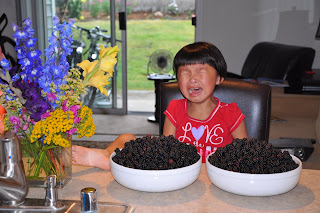 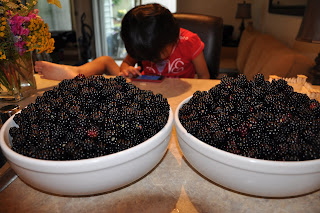 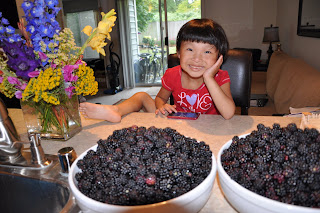 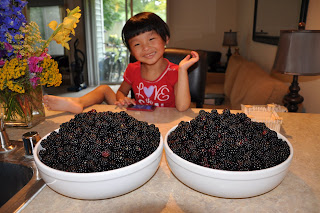 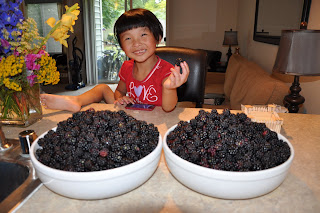 She has her leg up on the table to show off the mortal wound she received while picking berries today. In reality it is three little scratches but you would never know it from the amount of hobbling around here she is doing or from the size of the band aid she picked out to cover the above mentioned three miniscule scratches.
The trail behind our apartment is COVERED in blackberry bushes for miles. I saw several families and individuals out picking them this morning when I went for a walk. I told Glen when I got home and he was dressed with a bag thrown over his shoulder before I even knew what happened. We walked down a little ways and found the mother load. I would guess that we ended up with about 3 gallons of blackberries. WooHoo! Free fruit!

Glen even made a blackberry cobbler for dessert. It looks really good! I will have him take a picture of it to post later.

We have been meeting here and there with school district officials and special ed coordinators trying to get Norah's IEP started.

Norah has had the sniffles for the last few days. She doesn't seem any worse for wear, just a snotty nose and slight fever. I am really not surprised that she caught a cold. We have let her play at any and every playground we have come across, the five second rule has been indefinetly extended, and we are even encouraging her to go up and shake hands with everybody. Oh well. Her immune system should be strong enough to take down the seagulls at the beach by next year.