Don’t mess with the kitty!

I very rarely stray from the subject of China on this blog, however something has been banned that a lot of people may not know was even taking place.
I have known of this practice for years and this is the first report of this kind that I have seen. This is not a joke either a lot of women have suffered from what I see, in my opinion, is a cruel and inhumane practice. Unfortunately it still goes on in many parts if the world. Do a Google search on female circumcision and the results are horrifying. Sorry if this is too disturbing for you I try to keep this blog only China and our adoption and on the lighter side related but this is a topic that Lori and I have discussed many times. I may remove this post, I don’t know how long I will leave it.
Glen 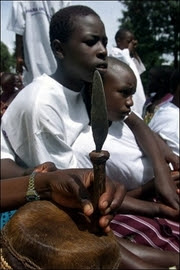 CAIRO (AFP) - Egypt on Thursday finally banned all female circumcision, the widely-practised removal of the clitoris which just days ago cost the life of a 12-year-old girl.Officially the practice, which affects both Muslim and Christian women in Egypt and goes back to the time of the pharoahs, was banned in 1997 but doctors were allowed to operate "in exceptional cases".
On Thursday, Health Minister Hatem al-Gabali decided to ban every doctor and member of the medical profession, in public or private establishments, from carrying out a clitoridectomy, a ministry press official told AFP.
Any circumcision "will be viewed as a violation of the law and all contraventions will be punished," said the official, adding that it was a "permanent ban".
A survey in 2000 said the practice was carried out on 97 percent of the country's women.
In the latest fatality, 12-year-old Bedur Ahmed Shaker was taken by her mother to a private clinic in Minya, a town on the Nile south of Cairo, for the operation. She died before she could be transferred to hospital.
Her mother accused the woman doctor of negligence, charging that her daughter's death was linked to the anaesthetic and not the removal of the clitoris, for which she had paid 50 pounds (nearly nine dollars). Police have arrested both women.

Glen your heading had me intrigued... and although a very serious subject you did give me a giggle with the heading! A thought provoking post... L