Lori and I heard from Annie this weekend, although her E-mails were short because she is studying for her final exams. Annie’s E-mails reminded me of when Lori was getting ready for a test in nursing school. She was studying all day every day. I would find her many nights passed out in bed with her book on her chest, wiped out from many late nights of studying.
We did confirm her address and sent her a birthday card & gift she likes London-based pop singer/songwriter, Lilly Allen, so I got her a "clean radio" edited Wal-Mart version of Lilly Allen’s CD and sent it to her. It should get to her before her birthday. When I went to Barnes & Noble to pick up the CD it said. “ Parental Waring Explicited Content“, OH MY, well that is not a way to start a good relationship with her parents now is it. So off to Wal-Mart I went. (they only carry edited versions).
We confirmed she will be flying in on the 11th of August, so 6 weeks to go. I hope she is going to be out of school after this week of tests so she has the next 6 weeks to spend with her family. Leaving them for a year has to be hard. Our AYUSA rep has set up our orientation meeting on the 4th of August. I am looking forward to hearing what they have to say. It is suppose to go over the metamorphous that the students go through the year, as she begins to settle in.
We also got a white bed, dresser and nightstand for Annie from a friend of ours that she had in her garage but didn’t need anymore. It all looks brand new, thanks for your help Melissa.
Below is a photo of Annie a year ago at her 15th birthday party with her cousin standing next to her. We hope to get some more recent photos of her in the next couple of weeks. Because kids can change so much over the coarse of a year. In all the pictures we have gotten of her so far she looks like a happy and out going girl.
Glen 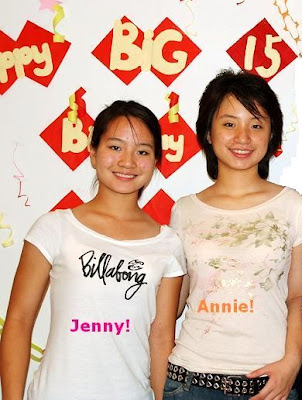 Glen that is such a good thing you and your family are doing. How very sweet.