One Year with Norah (Part one) 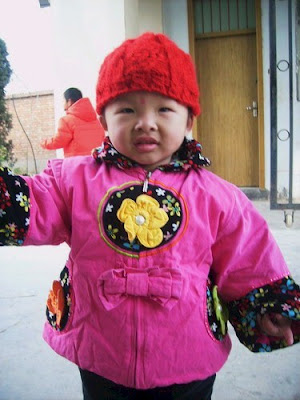 After I got to typing I realized that this is going to take a couple of post to get through. I don‘t know how many, I just wanted to let you know where Norah, Lori and I started from to see how far she has come.

It has been one year since we came home from China with Norah. Norah has come so far. When we got her in China she was profoundly deaf, and didn’t have a clue what was about to take place in her life. She was carried through the door of the civil affairs office and we recognized her right away. Norah, Lori and I played and played for 20 minuets while all of the other families in the room also played with their children and asked questions. Norah was laughing, giggling, and we were feeding each other cheerios. All was well and then it was time to go. I don’t know exactly how to describe Norah’s reaction to the next thirty minuets to make you understand just how upset she was when we left the room. She kicked, flailed, and screamed and cried, anything she could to try to get away from Lori and me. This lasted through the walk to the photo lab for the required adoption photo, all the way back to the street across from the hotel (I think it was about 30 minuets but I am not sure time seemed to stand still). Finally exhausted she calmed down enough to let Lori set her down. ( Let me add here that Norah had NO idea who we were. She had not received her care package that had pictures of us in it along with treats and toys. We were just these strange people with cheerios that were running off with her and her nanny from the orphanage was letting them. It had to be horrifying for her. So her reaction was totally justified.)

We stopped by the water fountain outside the hotel to let her see it and to give her more time to calm down, then Lori and Norah walked hand in hand into the hotel looking like they had done it a hundred times before.

Over the remaining time in China Norah would cling to Lori. If we were outside walking somewhere she would not let Lori put her down. This went on for the next 3 days, at the time she weighed 29 pounds. I would try to carry her but if Lori was around I was Norah’s second choice and she would not let me carry her. She would play with me, let me feed her and do all the things a parent has to do for their child. Norah was in survival mode. If we were out to dinner and Lori got up from the table Norah had to go with her. She was not going to let yet another caregiver get away that easy.

From day one we started teaching Norah sign language and this helped the situation. She could now communicate some of her basic needs with Lori and I. She really seemed to love the fact that she could ask for diffent things with different hand movements and get them.
During our time in China with Norah it was wonderful to see her starting to accept Lori and I as her new caregivers and painful to see her in times of great grief. She had night terrors where she would would be screaming, all kinds of pissed off and you just had to let her be until she was finished and either woke up enough to want to be comforted or fell back asleep all the way. We got some really good advice from one of the other families that were adopting for the second time in China. When the child is having a night terror touching them or trying to comfort them just prolongs the event and even makes it worse. Norah is such a strong person that the moments she would let herself greive didn’t last long. I Use the word caregivers because Norah has been moved around so many times in her short life that I don’t think she knew what parents were. She simply had different people in different places that provided for her in one way or another before we came along. I have a strong feeling that her foster family thought the world of her even though she was only with them for 6 months. It is obvious by her ability to open up and allow herself to care for us and to allow us to show her affection that she ran across some really great people in all of that moving around she did.

After returning from China Norah and Lori stayed home for the first three months, while I went back to work.

Norah became ever more attached to Lori, to the point that if we all went to the store together and I got Norah out of the carseat she would immediately start reaching for Lori and I could not carry her. This was kind of hurtful to me but I understood that she was still in survival mode and Lori was her crutch. After sometime Norah started to get possesive of Lori. I was not allowed to hug Lori or sit by her on the couch. Norah thought Lori was going to be all hers all the time and I better get that through my head. All this time I was still a good playmate and caregiver for Norah, she just wanted Lori all to herself.
Well, that was not going to work. It was wearing Lori down and was not helping Norah and I form a real attachment. So I would start taking Norah to the park, the store, outside anywhere we could be together one on one, and it slowly started to work. She would scream and cry when we would leave the house and call for mama, but once we were a couple of blocks away, it was like ok daddy where are we going today? Within a couple of weeks I could leave with her without her crying at all but if Lori was around at all I was still playing second fiddle.

By this time we had had her hearing tested and confirmed that she was profoundly deaf. Norah was fitted with hearing aids that gave her access to some loud sounds but not high pitched sounds. It put her in the 50-60 DB range. She had also learned quite a bit of sign by now AND it was time for Lori to go back to work from her time off on FMLA.

Come visit our site called goodkin, which is all about parents creating their dream families.

There is a great story today about a woman who adopted from China and Ethiopia.