One Year with Norah (part two) 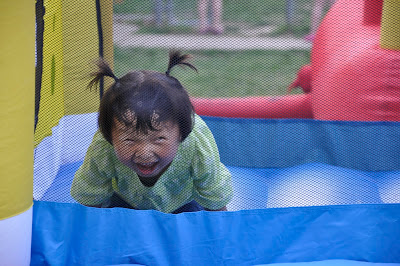 So in preparation for Lori returning to work we contacted the daycare that our 18 year old son had attended. They had an opening and Lori started taking Norah to daycare a couple of hours a day and staying with her to get her used to the daycare workers and kids there. This payed off and she was happy to go and play with the other kids.
Lori went back to work and I was still doing drywall at the time, so I would take the day off to take Norah to doctor appointments and for speech therapy. One of these appointments was for her cardiology workup, where her cardiologist said to consider her heart "normal". What a relief. My back started to get worse and I was having a hard time getting through the days at work, so I started working half days in hopes my back would get better. It didn’t and I ended up having to stop doing drywall because the pain in my back wasn’t getting better and was in fact getting worse. An MRI and CT scan confirmed what we had already known and feared, so now I was back to seeing Dr.s for the third time in six or seven years to try to fix me yet again.
On the plus side I have gotten to spend a lot of time with Norah. I was able to be home with her after her CI operation and to work with her in the mornings on listening. She has grown so attached to me because of it. It is really nice to see something so good come from something so painful.

Norah had her first CI activated in September 2009. At the first activation she could hear sound (it is in the you tube video). We didn’t know how much, but she could hear something and that was good. I practiced with her in the mornings and then about 6 weeks post activation she could not hear as well. So we did a test in the hearing booth and she got to 50-60 DB range. We were almost having to yell to get her to respond to the ling sounds or even to get her to acknowledge she heard her name. I was getting worried that she was at a platue because she was just about as high as they could turn her up on her map for her CI. So Children’s Hospital got the people from Cochlear to come help with her map and we went home with a new one ready to practice again. Within a matter of days I could see an improvement at home. She could all of a sudden hear a whisper. So we returned for another hearing test, this time 35-40 DB then a month later 30-35 DB across the board. That was her last test and her hearing has gotten better, so I look forward to her next test in the booth. Even with having Norah activated and in a good map, she still won't come to her name if called however she will acknowledge that she has been called by looking up at you so she can see you sign. She is also starting to make new sounds with her voice. She is still having the occasional nightmare but nothing like the night terrors that she experienced at first. She still thinks Lori is the cats meow but all my hard work is paying off. I am growing on her, and am no longer seen by her as competition for Lori's love and time. When I sign to Norah that I love her she signs back to me no no no. I am not sure that she knows what the sign means but I am sure she gets it on some level. This whole time she has been loving and affectionate with Lori and I but is still on edge. If we are in the living room she was always watching us to see what we are doing, if she sees one of us is putting on our shoes or if Lori grabs her purse she will get upset and want her shoes on so there are signs that we can see still at the 6 month period that she is still on edge and is not totally bonded and secure in the fact that we and she are here to stay. It makes perfect sense to booth of us because she had spent about this much time with her foster mom and dad in China before we showed up to change her world. I know she is growing fond of us. I can see it in her eyes, but still I don’t think she trusted us totally at this point, that all the good times she has been having with Lori and I are forever. I don’t think she knows we are her forever family after being moved around so much or if she even understands what a family is. After having her home for 6 months I can see it must have been very hard on her foster mom to say goodbye. I know with continued love, time and patience she will see how much she is loved and we and she are not going anywhere. It will be nice to see that day, when she will wake up in the morning and not be afraid just because mom and I are not in the room with her. We are having the best time with Norah her personality is coming out more and more and we know she still holds some underlying fear that this will end. Now we have been home a full six months and just had our update with the social worker……