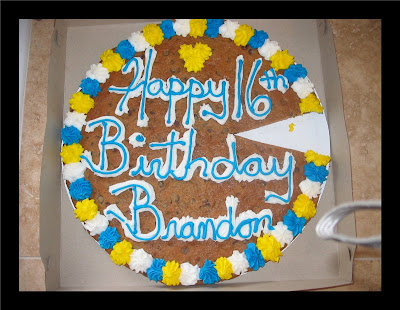 We knew what we were going to be getting Brandon for his 16th birthday for sometime now. So after many searches on the internet and at the big box stores: Sears, Target, Best Buy, Circuit City, K-mart, Radio Shack, and Wal Mart. We had made our choice, a 32 inch VIZIO flat panel LCD TV & mount (made by the same company that makes LG). It is sooo cool. After I hooked up the surround sound and DVD player to it, with the sound and size of the screen it is like he has a movie theater in his room. The TV screen can also be used as a computer screen, good for all the games and you tube watching he does. He will buy the cable that will allow him to use it as a computer monitor when he gets paid. Yes, he is a "little" spoiled, I know, but Lori & I did tell him not to expect the same treatment on next years B-day. I was going to get a good shot of the birthday cookie we got him. This is the condition I found the cookie in when I opened the box. Looks like Brandon already had a snack. Happy Birthday Boo. Yes, we still call him Boo in front of every one with out thinking about it and have no plans to stop. 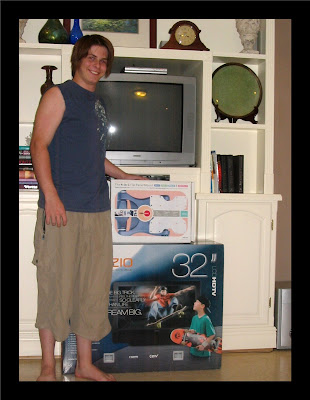 That's a Weird Al Yankovic's video on the big screen. 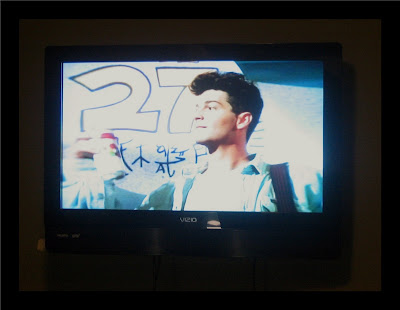 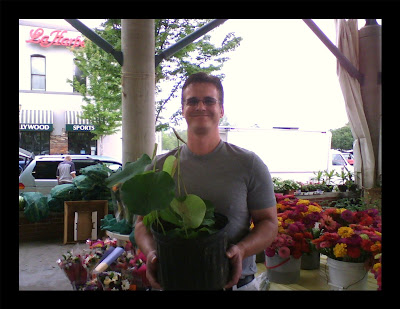 Me and Lori got up early this morning & headed down to the River Market. We haven’t been down there in years. To our surprise it has grown to fill the entire market area and spilled out to the surrounding streets. When we do get to go we try to only buy from the farmers that grow there own produce not from the ones that just buy thier stuff from a wholesaler and then resale it, that, in our opinion, is not what the river market is for. Well on to my becoming a dork. First on the way through the market me and Lori spotted an eggplant with hair, that looks like it told one to many lies. So I whipped out my cell phone and got a pic of the Pinocchio Plant. (To the creators of Veggie Tales: This eegplant would be a great new character.) It was the first time I had ever used the phone to take a photo, it works so good I think I will try to make a habit of it.
Then we went on through the market to find one of the water plants I have been wanting to add to my pond plant collection. It is a lily that rises up out of the water and the leaves get huge, helping to shade the water from the blazing sun we get here in the summer. So I had Lori snap a shot of me with my prize, I look like the cat that swallowed a canary. Man I’ve become a Dork, luckily my wife is partial to dorks. So that makes me
A Happy Dork.
Glen 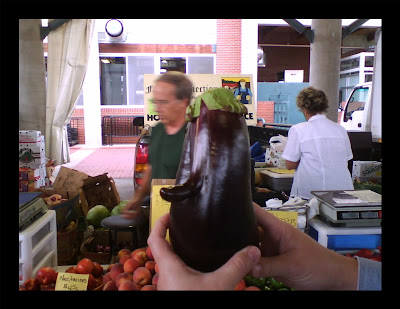