Not Your Typical Friday 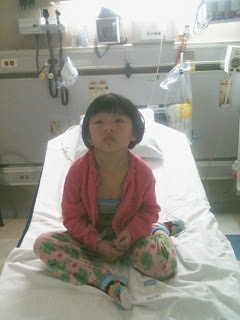 This morning I was awoken by Glen yelling that Norah was having a seizure. He had heard her make a really guttural sound and went to check on her only to find her face down in our bed in the middle of a tonic clonic seizure. It only lasted about 2 minutes but was the scariest thing that I have ever seen. Seeing people rolling into the OR with their chest cut open and someone massaging the heart isn't scary to me. Seeing Norah have a seizure scared me to death. Glen and I are both still, even late tonight a little shaky. We called EMS, they were here in under 2 minutes (; . By the time they got here Norah was breathing again but was exhausted and not very responsive at all. They checked her out said that they could take her to children's hospital or we could stay home or take her to children's in the car. We opted for us taking her in the car. There was no way, with her other issues, either one of us was going to be happy at all until a doctor checked her out. We put a sweater on her, grabbed some extra clothes and took off for the hospital. They got us right in and gave her the once over. You could actually see her coming back around out of the seizure. At first she was really groggy and not super responsive. She just layed there in my lap and stared at the TV. By the time they discharged her she was climbing up over my shoulders, pulling on my hair and doing her usual constant level of vocalization. She continued to improve all day, ate lunch like she was a farm hand, and played hard till bedtime. She has no idea what happened because she started seizing in her sleep and didn't wake up till we were on our way to the hospital. They aren't sure if the seizure was brought on by fever since she has not had any cold symptoms recently but she still got a dose of Tylenol before sending her off to bed (which is now pushed up against our bed, just in case) for the first of what looks like will be the usual 102 times before she actually goes to sleep. Follow up will be in about 3 to 4 weeks probably.
We can't even fathom what life without Norah with us would be like but today sure did bring up a lot of "what ifs". We are very fortunate that it turned out as good as it did. I hope to NEVER see that again.
Big thank you to Melissa! You are always the calm voice of reason and experience. Love you.

I would have been scared out of my mind. I've never witnessed a tonic clonic seizure but I have seen video and it's pretty hard to watch.

Epilepsy can develop and display at just about any age, if I recall correctly. Not that you want to think about this being something that could ever possibly happen again. But if she has another, they need to do an EEG.

But I'm praying for you guys that none of that is necessary and this is a one time thing- never to happen again! <3

Oh no! I am so sorry! I will be praying for Nora and for you both! It must have been so frightening.

Thank you. It was very scary. We are in the process now of getting referals so that we can go to the first time seizure clinic here and get Norah evaluated. They should do a routine EEG there and be able to tell us if it is epilepsy or some sort of febrile seizure.
Lori

How very scary. Hope they can find the reason and she will be okay from now on.