A Home Study Date Has Been Set. 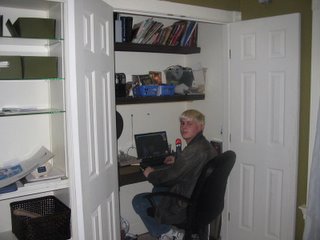 Well ready or not we set up a date with our home study agency. It's 2/24/06 there's still alot of things to get done around the house before then. I know that we knew this day was coming a year ago but we have been working on this house for years and there's still things that need to be done/finished. Like take the photo to the left for instance. That would be our son sitting in his office, yes I said office. He used to be in the room right across the hall from us when he was young. That's where he (and we) felt safe, but now since he is 2 inches taller and out weighs me I figure that he's ok at night being 1 room further away from us down the hall.
With the new baby coming he decided to move to the room down the hall so that she could fell safe and make it easier for us to check on her. It was not a far move but still I didn't want him to fell like we were kicking him out, so what we did is create him a teenagers paradise to move into. I took the coat closet from the living room and sealed it off, then put double doors on the inside of his new room to help detuor his new little sister from getting into his stuff when he's not home. We got him a nice soft office chair to sit in, and under counter lights so he can see what he's working on. For intertainment we put in a control unit that lets him play any game system that he has without unhooking everthing, and a dvd player with surround sound to boot. For Christmas he got a new laptop because he worked all last summer and saved his money for his old one that I bought on ebay used and it fried after 1 year. We felt so bad for him because he really worked hard for that laptop, so we got him a new one for Christmas with warrenty. Only problem is now we have to pry him out of his room to spend time with us. I can remember when I was his age my room was my sanctuary too. Where was I going with all this, oh yea, home study because I sealed the door off in the living room there now a place that has to be painted you can see it in the left of the second picture. And you can see there a roll of carpet that matches the rest of the house that has to be put into Norah's room after we paint it.,What's that dog doing down the hall. He knows he is not supposed to be on the carpet. Anyway, nothing huge needs to be done, IT JUST NEEDS TO BE DONE. I hope there are other people out there that do projects on their houses and get them 99% done, then move on to the next projet. Because that's the way we have done stuff around here for years. 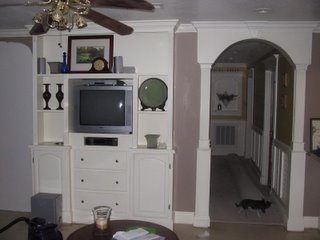 Me and Lori have been transforming this house as we have had the money out of pocket so it has been a slow on going projet that we have picked away at even when our income got cut in half when she went to school. She takes her state boards for her RN on Valentine's Day, then she will have a license, right now she is working on a temp. license that she got when she graduated. I'm so proud of her but she needs to get her life back it's been nothing but study, study, study for over three years. I will post pictures of our progress if there is any progress.
Glen
at 3:40 PM

You have a lovely home Glen. I am sure your future little girl will enjoy it.

I finally got a chance to read your entire blog and I love it. Your love for Brandon and Norah shines through!
(And we have projects all over the house that won't get really done till we get ready to move; thank God we're not the only ones!)