What a fun day. 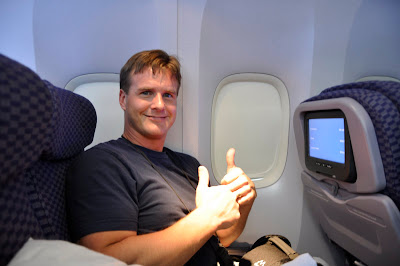 We had a good day today. It started off great because we were headed to China to get Norah and it just got better from there. I was worried that we would miss our connecting flight so I asked the flight attendant on the first flight what was the best way to get from Terminal A to C in the Newark airport. He gave us a good tip to take the shuttle bus and then we would not have to go back through security. It only took us 12 mins. to get from terminal A to C without going back through that mess of a check point. So we made it just in time to take turns to run use the restroom and then immediatley get in line to board our flight to Beijing. 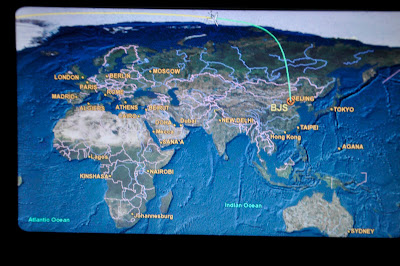 In flight monitor showing where we are and where we will be going. 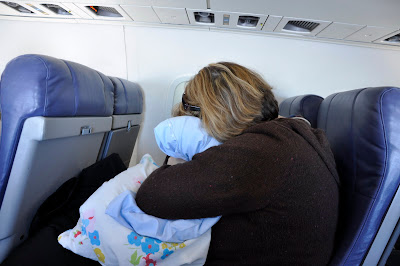 Lori had a rough time on the flight just before we landed, she wasn’t the only one, some people had to use the barf bags and some didn't get to them in time because the turbulence was rocky at the end of the Beijing flight and then the bus ride to the hotel was an adventure that I am glad I did not miss out on. 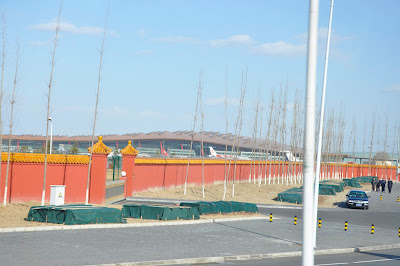 Check out the dragons back. This is tirport terminal at Beijing. It just opened before the Olympic games. The guides all told us that it is representative of a dragon. 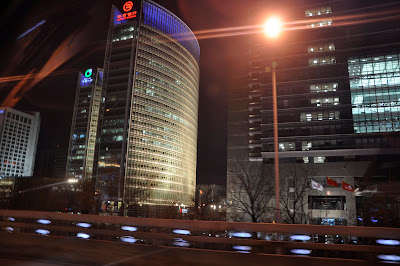 Beijing has fabulous architecture both new and thousands of years old. I hope to get some better photos of it tomorrow. 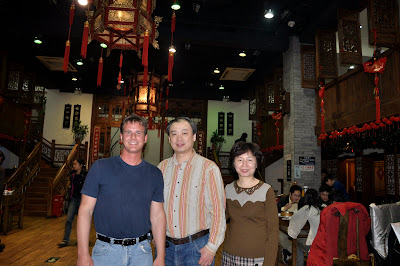 Love your parents Annie!
Annie’s parents were so excited to find out we were coming to Beijing. We didn’t even get our room key before we were both making plans to meet up. Lori was sick as a dog, so she couldn’t go out to dinner with us. She told me to go ahead because she didn't want me to miss out just because she wasn't feeling well. It was a shame to because we had the best time. Annie’s grandma was able to join us too. Annie has such a kind and loving family, they made me feel right at home like I was out to eat with friends I had known forever. Boy can they order some food we must of all had 12-14 different kinds of dishes all from the southern region of China. It was fantastic. We will be with the tour group tomorrow, then they want to take Lori and I out for Peking Duck and a play at dinner time. Sounds like fun! We will have to see what tomorrow brings. Today I had a blast and we got one more day, and thousands of miles closer to Norah.
Glen

Yippee! You're there! I hope Lori is feeling better. She'll need all her strength for the excitement ahead!

Beijing is beautiful and I think you're there at a good time! Looks like the weather is moderate?

Remember -- don't rinse your toothbrush in the sink in the hotel bathroom and keep your mouth closed in the shower! Hee hee... years later, and I still think about that even when I shower at home!

I am so happy for you guys and will be checking in on you!
Trish Friend
Carrie

Glad you made it there safely!! I had a tough time on our flight from Newark to Hong Kong... spent a good bit of that time getting to know the restroom! Tell Lori, I understand!

It looks like you're having a blast! Poor Lori ... too much tequilla on the flight, or not enough? Keep having fun, and thanks for keeping us all posted!

So happy you are all in China. Glen I have seen many of your posts on the CCAI waiting child group and I know how over the moon you are about your new daughter. Enjoy every moment of this once in a lifetime journey. I'll check in to see how things are going!

I did not know you were from AR, my mom lives in Hot Springs Village. I am from your CCAI group. Can't wait to follow your journey!

You are so close!! Yes!! Annie's parents sound wonderful - it's nice that they went to dinner with you.

I hope Lori does better!

Woo Hoo! You're finally there. I'm jealous. . .I wish we'd had someone to give us the royal treatment while there. You're getting to experience so much more than the majority of us get while there. Enjoy!

Praying that Lori is feeling better, and that this is your ONLY illness!!!

Blessings from our family to yours,
Kim & all

Hope Lori is feeling better I got really sick as well from the flight fom SF to Beijing . Beijing is wonderful I hope Barb is your tour guide she is amazing .Looking forward to seeing pictures of you and your precious girl .