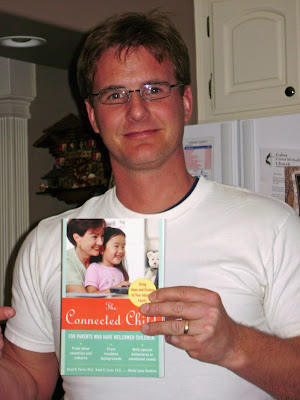 I helped set up for the Chinese New Year celebration yesterday and it went off without a hitch. Although when we were setting up we noticed that our FCC-CA’s biggest fund raiser of the year was missing a lot of guest. There were, I think 276 people that attended in 2008, this year there were only 118 people that attended. I don’t know if the celebration this year was just another victim of the recession or attendance was low because adoptions from China have slowed so much that it is just a reminder to people that it will be one to three more years till they see their child. Possibly a combination of both things but I hope more people will join us again next year.
It was fun to see all the kids that are in our local FCC group there are a bunch of the kids that are Norah's age, last night alone I would say there were 15-20 3.5 to 4 year olds there. Kim that runs Dillon International welled-up with tears when she saw the photos of Norah, that lady sure does love when the kids come home. She is also a social worker that does home studies for Dillon International. She told us that we had to get the book, The Connected Child. She said she believed so much in the book that she had already given away 15-16 copies of it. It just happened to be one that I had already had my eye on when I bought the book, Toddler Adoption, A Weaver’s Craft. I knew The Connected Child would be the next book on attachment I would read. After we got done helping clean-up from the celebration we went to Barns & Noble to get it, it will probly be the last book I have time to read before we go to China. I will read it at night in bed during the next couple of weeks before we go and Lori the book worm said she wanted to read it on the plane. I will let you know what I think of it when I finish. Hope we hear something soon on our travel approval from China.
Glen

Im looking for some good books to read until we travel. I will say that after following your blog for so long, I never thought our families would be travelling together!!!

Looking forward to getting to read some of those books

I have really gotten a lot out of The Connected Child. I read it at the time we adopted our son and have referred back to it often--some of the topics I just glossed over when our son was first home have become issues now, almost a year later, and it's really nice to be able to go back and re-read and get some advice.
Norah is almost home, hooray!
Marcy in GU