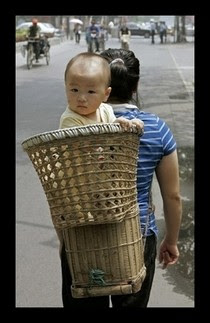 BEIJING (AFP) - Chinese officials have been told to ditch the hardline propaganda behind the nation's one-child policy in favour of a softer touch to ease public opposition, state media reported Sunday.
Menacing slogans on posters daubed on walls advocating forced abortions and telling parents to have only one child or face harsh retribution have damaged the image of the policy, introduced in 1979, the Xinhua news agency said.
It quoted a new directive from the National Population and Family Planning Commission which orders local officials to replace such slogans with a choice of 190 gentler ones that contain appeals rather than threats.
Current slogans range from the absurd to the outright menacing -- "One more baby means one more tomb" is one example cited by Xinhua.
New slogans aim to persuade rather than threaten, such as "Mother earth is too tired to sustain more children."
Under the policy China's urban dwellers are allowed one child, while rural families can have two if the first is a girl.
Ruthless enforcement has triggered widespread opposition, especially in the countryside where children are valued as additional economic muscle.
Riots have broken out against forced abortions and other measures, such as heavy fines, the destruction of homes and confiscation of property.
However ruling Communist Party officials and the rich often ignore the law themselves or pay the necessary fines.
Despite its unpopularity, the policy has been effective in slowing China's demographic growth. At 1.3 billion people, it already has the world's biggest population. Off yahoo news